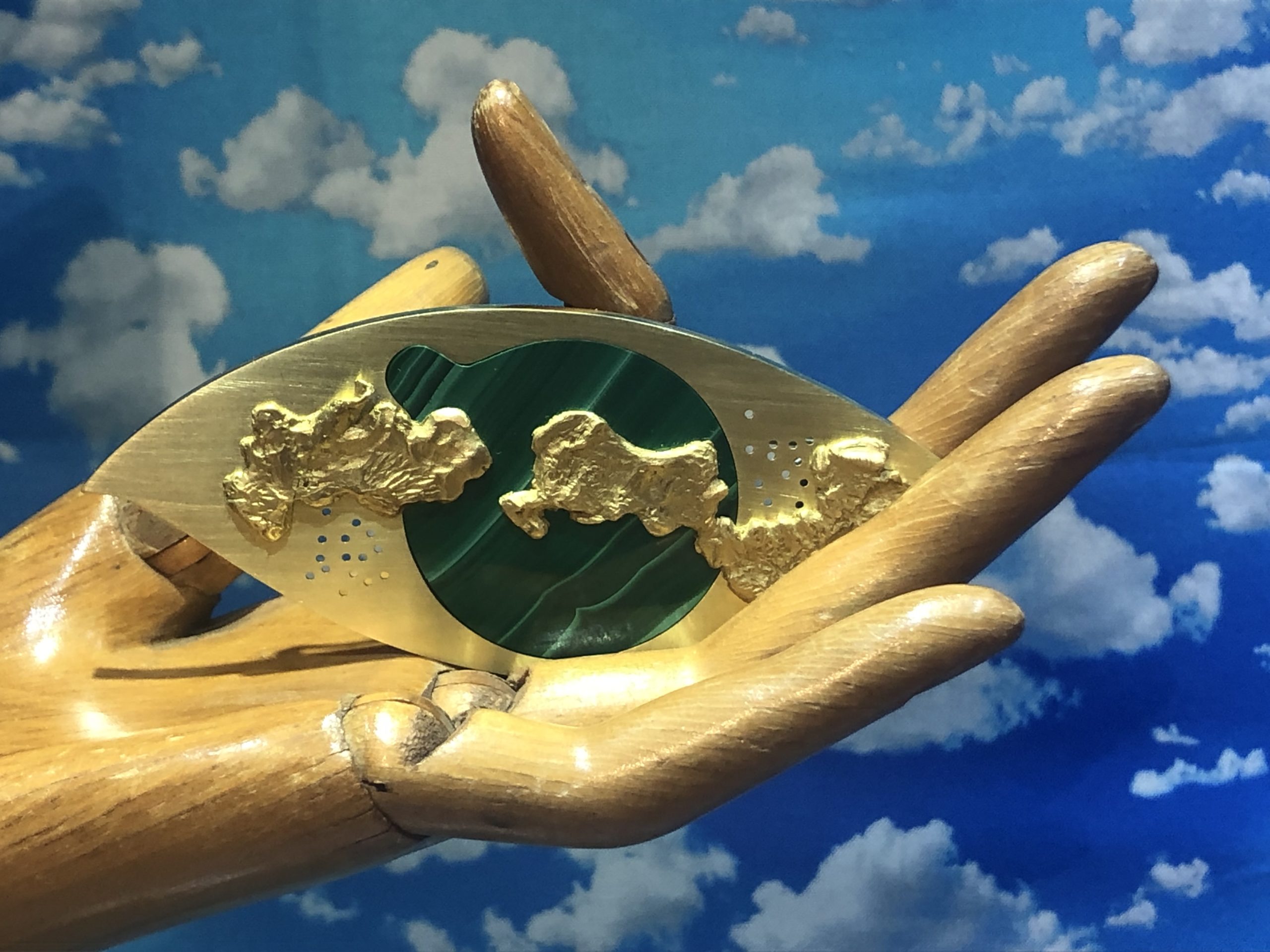 Join us for a special event on the eve of our fifth annual NYC Jewelry Week hosted by our Co-founder, Bella Neyman at Salon Art + Design.

Join Bella Neyman, jewelry curator and co-founder of NYC Jewelry Week for a conversation that explores the world of collecting jewelry. What drives the passion for collecting jewelry and is it any different than collecting fine art and design? What considerations (value, provenance, materials, storage, wearability, secondary market) come into play when starting a jewelry collection and who helps guide that process? Featuring a panel of esteemed voices, the program will explore collecting jewelry from the perspective of a gallerist, a collector, auction house specialist, and a heritage brand who all play a major role in driving the jewelry market.

Please RSVP to secure your spot at the panel below, but you will need to purchase a ticket to Salon Art + Design at thesalonny.com or on-site.

As Sotheby’s Artist Jewelry specialist, Tiffany Dubin pioneered a new genre for Sotheby’s that
lives within New York’s Fine Arts division, bringing wearable art to market. Her most recent project was Sotheby’s inaugural auction ‘Art as Jewelry as Art’, which embodied the zeitgeist of the moment and cross-collecting as a lifestyle. Tiffany specializes in creating new markets. She was the Founder and Director of Sotheby’s Fashion department, selling everything from haute couture dresses to Tom Sach’s Paper Kelly Bag. She was the first at Sotheby’s to develop partnerships with luxury brands such as Chanel, Bombay Sapphire, Chopard, and Cartier. With nearly two decades of experience selling, appraising, and cataloging art, jewelry, and fashion, she has been involved in the sale of numerous prestigious collections, including the Zilkha Collection, Property from the Goldwyn Collection, The Scaasi Couture Collection, To Have and To Hold, Handbags and Pulp Fashion. According to one fashion correspondent, “What she has done is make the buying, selling and collecting vintage clothing from an obsessive, arcane club into the wider public arena” (Amy Fine Collins, Vanity Fair).

Tiffany graduated from Georgetown with a BFA in International Relations and studied Appraising Fine & Decorative Arts at NYU. Tiffany began her career as an associate curator for the US State Department’s Art in Embassy Program, after which she joined Sotheby’s as a Client Advisor. She then left Sotheby’s to launch her business, Tiffany Dubin’s Lair, at Henri Bendel Department Store in New York City. She rejoined Sotheby’s Private Client Group as a Business Development Director before becoming a Senior Business Development Executive offering personalized services to high net worth and VIP clients. Tiffany is additionally a USPAP Compliant Appraiser, speaks fluent French, co-authored the book Vintage Style (Harper Collins, 2000), and can be followed on Instagram at @tiffanydubin.

Didier Haspeslagh has been a collector since childhood, and came to London from Belgium in 1980 to work as a porter in Christie’s, London, before founding Didier Antiques in 1982 to deal in design jewellery and silver from the late 19th- and 20th-century art movements including Wiener Werkstatte, Art Nouveau, Arts & Crafts, and Art Deco. He started at the grass roots, by stalling out at local markets like Camden Lock and Camden Passage in London, progressing to larger antiques and design fairs in the UK and USA, and for the last eight years Didier Ltd has taken part in TEFAF in Maastricht. Didier Ltd has also exhibited at the Winter Show in New York, Masterpiece in London, Design Miami in Miami and Basel, and the gallery will be the jewellery partner of the SALON of Art and Design this November.

Didier Ltd is a London-based gallery, founded by Didier and Martine Haspeslagh in 2010, that occupies a unique niche in the art and design world by specialising in jewels created by modern painters, sculptors, architects and designers, all acquired from the secondary art market, and where the design of the jewel, rather than its intrinsic value, is paramount. These miniature wearable sculptures can represent their most intimate artistic expressions, made for their immediate circle of friends and family, both as unique jewels and those produced in very small limited editions during their lifetime.

After working for 5 years at IBM as a System Engineer, Tom Heyman joined his family’s business, Oscar Heyman, 35 years go. Tom combines his love of gems with his technical expertise to guide design, sales and manufacturing at Oscar Heyman. Outside of work, Tom enjoys spending time outdoors with his family skiing, gardening and caring for several backyard bee hives.

Since 1912, Oscar Heyman has been creating magnificent jewelry with the finest gemstones sourced from around the world at their atelier in NYC. The firm was founded by brothers Oscar, Nathan, and Harry after emigrating from Latvia and remains in family hands today – run by members of the second and third generation. Beyond diamonds, rubies, emeralds and sapphires, Oscar Heyman specializes in esoteric gemstones with equally glamorous appeal, including alexandrite, paraiba, cat’s-eye chrysoberyl, opal, aquamarine, star ruby and star sapphire. Every piece of jewelry is signed and numbered, assuring the artistry Oscar Heyman has delivered for over 110 years.

Bella Neyman is the co-founder of New York City Jewelry Week. She is also an independent curator and journalist specializing in contemporary jewelry. Most recently she served on the Curatorial Advisory Committee for “45 Stories in Jewelry: 1947 to Now” at the Museum of Arts and Design in New York. Since graduating with a Master’s Degree in Decorative Arts and Design History from Cooper Hewitt, Smithsonian Design Museum & Parsons, The New School for Design in 2008, she has worked for some of New York City’s leading design galleries. Bella’s articles have been published in The New York Times, American Craft, and the Magazine Antiques. She is also a frequent contributor to Metalsmith magazine. Bella lectures on topics related to the history of jewelry at the 92NY Jewelry Center and Christie’s Education. She is on the Board of Art Jewelry Forum. Bella resides in Brooklyn with her family.

Julie Simpson is a collector of mid-century design including European jewelry by both artists and leading fine jewelry houses from about 1960 to 1980. Julie has passionately and unwaveringly loved jewelry since she was practically a toddler. After a job in the Japanese Art Department at Sotheby’s New York and during various careers in marketing consulting, yoga and nutrition she also trained to be a goldsmith at The Revere Academy in San Francisco, her hometown. She designed jewelry from her studio in Venice, California for a decade and sold her pieces alongside the works of her jeweler friends in the high-end concept store, SALT on Abbot Kinney Blvd.

She recently moved back to NYC while still maintaining strong ties to California by serving as a Trustee of The U.C. Berkeley Art Museum and Pacific Film Archive (BAMPFA) and is a member of The Edible Schoolyard Project (ESYP) Advisory Board. She loves to quote Hippocrates, “Let food be thy medicine and medicine be thy food,” and often describes herself as a “fool for beauty.”

Stay in the Loop!